Giving up the ghost

So I have finally admitted to myself that I will not be able to finish BAP-T in time for Alan's retirement. Too many things got in the way and then I lost all momentum on this project and now I am way behind. I have decided to pull out an old chart from a 2007 JCS called Tanglewood. This chart was created by Tracy Horner of Ink Circles and the thread is from Carrie's Creations. I have ordered the thread from Carrie. Unfortunately Carrie had a death in the family and there will be a delay of a couple of weeks before shipment. I don't think this will be a big problem because since it was charted for overdyes, there is not a lot of thread changing. I have liked this chart ever since I started it, but never got around to ordering the silks. 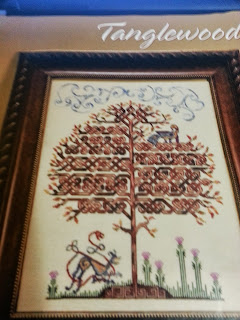 I'm a little sad about the change, but I think Alan will like it. My oldest brother has been asking me to do something for him forever. I've done little things but nothing big. I think BAP-T might become his. Right now I like it, but I don't like it enough to want to hang it in my house. This might change as I work more on it, but if it doesn't BAP-T will be his.
Posted by Kathy at 10:01 PM

"The only place where housework comes before needlework is in the dictionary." - Mary Kurtz, "The Needlework Times" April, 1978.

TUSAL or Totally Useless Stitch Along 2013